Prettier has changed my life. I wanted to learn more about how it worked, so I decided to take on a minor formatting bug I found in the most recent release. I've been wanting to spend more time documenting how I approach problems and learn new things, and this post is the result of that process.

So how does Prettier make my code, well, prettier?

Admittedly I only have a vague understanding of how Prettier works internally. What I know right now is that is has some means of parsing JavaScript (and other languages!) and reprinting it according to a predefined standard. In other words, magic, right?!

That sentence is a lot to grok, but the gist is that for code to be formatted, it's put through a pipeline that looks roughly like this:

This is a very simplified look, since Prettier does quite a bit more, like attempting to preserve some style choices that already exist in the code.

At SeatGeek we've been rolling out Prettier across our entire frontend codebase. I was upgrading it to a new version and came across a questionable change in one of our Enzyme tests:

It's harmless enough — the promise didn't make it onto a new line, and the indentation for the callback in the promise's call expression broke. But functionally it was still the same, so we proceeded with the upgrade and filed an issue with that context.

Side note: filing issues for Prettier is amazing. Their playground has a really handy button that opens a GitHub issue with the input and output already filled in. The authors have clearly put a ton of thought into creating a really solid developer experience.

A journey in fixing

Now that I have a moderately better understanding of how Prettier works internally, I'm ready to dive into the code. To kick it off, let's fork the repo, clone it, start it up, and write a unit test for this particular case.

Prettier uses jest for testing, so setup is painless.

I see a couple warnings, but everything passes on the first run. Cool!

Figuring out where to put the test is honestly the first big challenge. I see tons of jsfmt.spec.js files in the test output, organized into directories. JavaScript tests seem to all have their own top-level directories, and other languages are filed away in subdirectories.

My test case seems to touch a few different areas, so should it go in the function directory? arrows? I don't know enough yet, so let's find an example pull request to borrow from. There are a couple candidates from the 1.7.0 release that reference member chains, and #2786 in particular seems the most promising, pointing to member and method-chain tests. Now I'm on the right track 🌟

Just for fun, let's pull some levers and see how this breaks. I'll watch the tests with...

... and take a gander at printer.js. The size of the file is a little intimidating, but luckily the pull request from before gives me two starting points:

Breaking this function is oddly satisfying, because I can watch the test results come back with new and interesting ways of formatting the test cases. But even better is that it confirms I'm in the right place, and I can see exactly which test files cover this.

The test cases are super simple. An entire file is fed through the formatter, and the results are stored in a jest snapshot. So if I want to test my case, all I have to do is add it to the most sensible file (multiple-members.js seems close enough), re-generate the snapshot, manually edit the snapshot with the desired output, and tweak the printer until the tests pass. 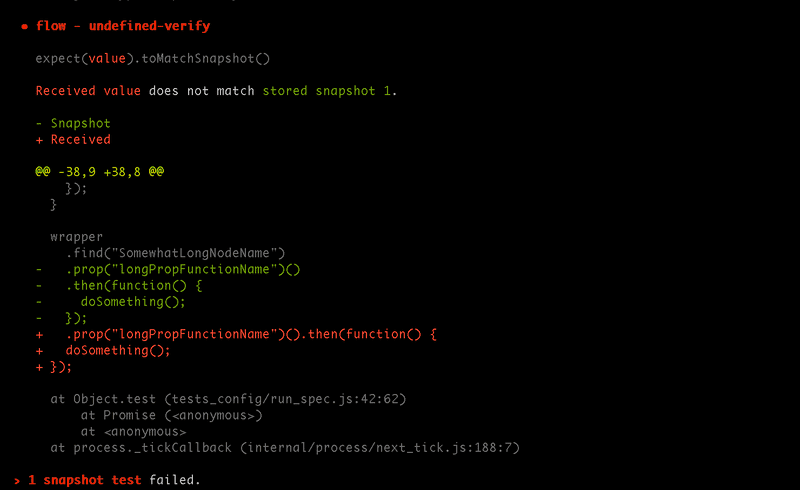 Sweet. So now that we have a test and know approximately where the issue is, it'll help to narrow down our bug. Let's take a look again at a simplified version of the code that's breaking:

We can learn a lot about how this code is interpreted by looking at how it's parsed in AST Explorer:

The point where the formatting breaks is at these nested CallExpression nodes: ('longPropFunctionName')(). Based on my understanding of printMemberChain from reading over its code and documentation, nesting CallExpressions is already supported, so there's a bug that's preventing it from working correctly.

I wanted to better understand the inputs and outputs for each part of the printMemberChain method, so I started logging variables at certain points. Surprisingly, printMemberChain was being called twice!

I was curious how it was handling the data, so I logged out the output of the first phase, which takes a nested AST structure and flattens it. The first call to printMemberChain grouped the first part of my test case (wrapper.find(x).prop(y)), and the second call handled the end (().then(...)).

Reading over the recursive method, I realized why: the process of flattening the abstract syntax tree was only looking for two types of chains:

But not Call-to-Call: a.b()(). So I added in a condition to allow nested CallExpressions, and the tests passed!

In all, I spent around four hours getting up to speed on how Prettier works, tracking down the bug, and filing a pull request (and a small followup) with the one-line fix. Even though the change was so simple, I feel like I came away from this with a much better understanding of its internals, and have a huge amount of respect for everything that Prettier's authors have done to vastly improve the developer experience of the frontend ecosystem.